As the "PUMP-CHASER" you are, you've probably gone through dozens of pump supplements and noticed that each product works well at first, but tends to lose its effect toward the end of the bottle. 😒

The reason for this???

Most contemporary nitric oxide-boosting supplements don't contain nearly the necessary amount of effective ingredients to maintain that "first-time feeling" and hold your pump throughout your workout. 🤦‍♂️

One of the biggest benefits to manufacturing your own supplements (as we do) is that we can afford to put the highest quality ingredients in our supplements and dose them at the appropriate amounts needed to always give you that "feels like the first time 🎵" skin-swelling pumps!

Our goal when we formulated PUMP 101 was to do two things very well:

So, if you are sick and tired of wasting your money and time on products that simply don't work, and are ready to experience what a true nitric oxide-boosting supplement is supposed to feel like, then trust us when we say you need to try PUMP 101! 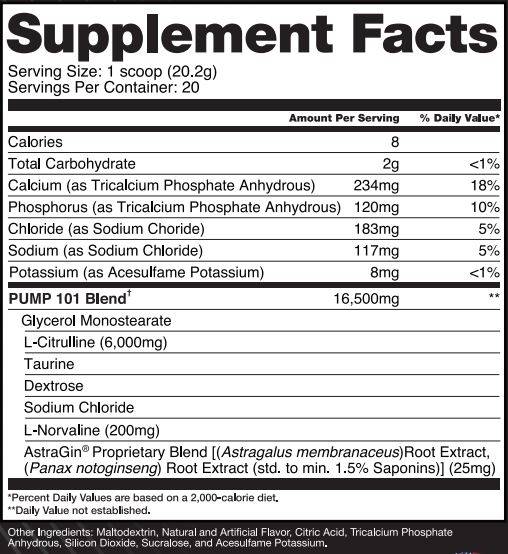 When you buy an Alchemy Labs product, you buy the promise that each one of our formulas is carefully manufactured in-house in our FDA-registered facility.

We are one of the very few brands that doesn't outsource the manufacture of our products, and by following strict guidelines to ensure you receive the highest quality and strongest supplements available, our products will never contain banned ingredients and we are proud to develop formulas that work for any level athlete. At Alchemy Labs, we place a great deal of effort and focus on those aspects of our company culture.

Glycerol Monostearate - Glycerol, a naturally occurring metabolite, has been shown to be a safe and effective hyper-hydrating agent. Glycerol is often used by endurance athletes because of its hydrating benefits and its ability to bind fluids, like water, to increase body fluid content. Which is believed to increase endurance and cell volume levels. Leading to increased performance levels and huge muscle pumps in the gym.*

L-Citrulline - L-Citrulline is the go-to nitric oxide booster for bodybuilders. Most commonly used to increase athletic performance, muscle pumps, reduce fatigue, and increase recovery levels. L-Citrulline is shown to raise blood arginine levels, and be more bio-available than other NO supplements like L-Arginine.*

L-Norvaline - L-Norvaline is a very special amino acid from the BCAA Valine. The reason most bodybuilders us L-Norvaline in their pre-workout stack is because of its ability to inhibit nitric oxide breakdown. The body naturally has an automatic shut-off switch for nitric oxide causing you to deflate and lose your pump relatively fast. L-Norvaline works by inhibiting arginase, allowing you to have longer, better pumps in the gym. Some studies even show it can improve pumps up to 60%.*

AstraGin - AstraGin® increases the absorption of many amino acids and peptides in the gut so more are delivered to the bloodstream to all cells in the body. Increases the steady-state absorption rate of arginine, agmatine, β-alanine, citrulline, creatine, leucine, peptides and tryptophan by 67%, 36%, 25%,45%, 33%, 58%, 41% and 53%.

Taurine - Taurine is used most frequently in the supplement industry for its cell volumizing properties. Some studies show after taking Taurine for 7 days can increase the body's ability to transport oxygen, and improve endurance during training.*

Sodium Chloride - Sodium Chloride, also known as salt, is an essential compound our body uses to: absorb and transport nutrients, maintain blood pressure, maintain the right balance of fluid, transmit nerve signals, contract and relax muscles. Sodium is an electrolyte within the fluid both outside and inside your cells. The balance between Sodium and Potassium particles contributes to how your cells maintain your body’s energy.*

When you choose Alchemy Labs, not only are you getting the best quality supplements on the market, you are getting formulas with unbelievable flavoring systems.

Your flavored supps should taste just as good as they perform — which is why we are constantly developing and perfecting our formulas and flavoring systems for you guys. With PUMP 101, you have the following options:

No matter which flavor you choose, you will be amazed at how great it tastes for such a heavily dosed formula.

TO WRAP IT UP

You train to #transformyourself into the best version of "you", and your supplements should help you get there — because we know that you won't settle for anything less than the best.

Why else would we manufacture everything in-house if not to ensure our customers receive the safest and strongest products on the market?!

Find out why some many people are choosing Alchemy Labs!

Can I take PUMP 101 with my other pre-workout supplements?

I am sensitive to stimulants; will this make me jittery?

No, this formula is designed as a non-stimulant pre-workout supplement that contains ZERO stimulants whatsoever!

As a dietary supplement, take one serving (1 scoop) of PUMP 101 30 minutes before your workout!

If I take PUMP 101 at night, will it keep me up and prevent me from sleeping?

Absolutely not; PUMP 101 is a non-stimulant pre-workout supplement, so it shouldn't keep you up at night!