Looking for the "Extra" Edge in the gym that not only gives you energy, but helps you hit your goals faster? 🙋‍♂️🙋‍♀️

SMOKED 2.0 was formulated to be the best pre-workout option on the market for anyone who is looking for an pre-workout that:

SMOKED 2.0 doesn't just serve a single purpose of "giving you energy" like most basic pre-workouts do. It was designed to help accelerates someone's fat loss goals with added Thermogenics like Evodiamine, and Rauwolscine.

Unlike most generic pre-workouts on the market today, we spent over 6-months developing a winning formula for SMOKED 2.0 that produced results for our customers. 🙌

SMOKED 2.0 is a pre-workout that you can take over-and-over again, knowing that each time you take a scoop, you are getting one-step closer to achieving your dream physique.

If you're ready to hit the gym & SMOKE another workout! Then pick up a bottle of SMOKED 2.0 today and start moving the needle in the right direction! 💪

Each and every single one of our products is manufactured in-house to protect the integrity of our brand & ensure that we are able to give you the highest quality ingredients/supplements possible. Our internal team works around the clock to source the highest quality raw materials from all around the world, and its our job to make sure we do everything in our power to continue to innovate and provide trustworthy, reliable, and powerful supplements to our customers. 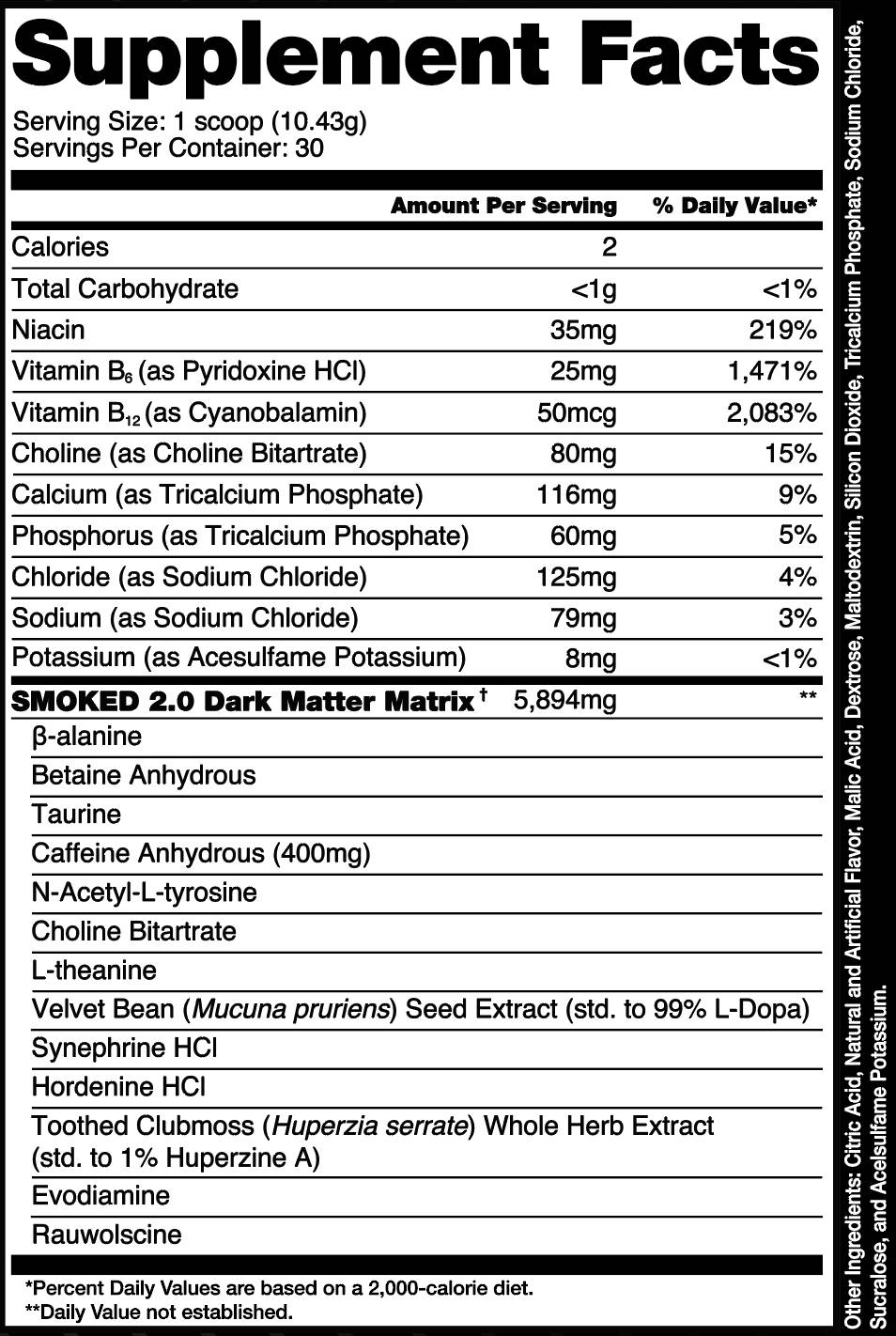 Beta Alanine - Beta Alanine is known for to being the king supplement for endurance. Beta Alanine works by delaying and reducing lactic acid build up in the muscle. Allowing you to push more reps during your workouts, increase stamina, and reduce resting time between sets.*

Caffeine Anhydrous - Caffeine has been confirmed that it can improve muscular endurance, power, and improve energy levels. New studies are starting to show that caffeine may have a thermogenic effect on the body & can assist in boosting metabolic activity.*

L-Theanine - L-Theanine is mostly know for its abilities to relieve anxiety. L-Theanine crosses the blood brain barrier where it inhibits binding of glutamate. Glutamate is known to increase during times of stress, the inhibition of glutamate receptor activity is thought to contribute to the reduction of stress. When combining Caffeine & L-Theanine together they act synergisticlly to improve alertness and attention. L-Theanine can also potentially reverse some of the side effects of caffeine like vasoconstriction.*

Rauwolscine - Also, known as Alpha Yohimbine, functions as a alpha receptor antagonist & the most potent form of Yohimbine. Research suggest that is can assist in weight loss and has mood elevating properties.*

As a dietary supplement, mix one (1) serving in 10-12oz of water 30 minutes prior o working out. Always asses tolerance first by starting with one half serving (1/2 scoop). Do not take this produce more than once (1) daily.

Great question, SMOKED 2.0 was formulated with a goal to assist in weight loss. We added in ingredients like Evodiamine, Rauqolscine, and Synephrine HCl to help make this a Thermogenic based pre workout.*

Does SMOKED 2.0 have a "Spice" taste like the OLD SMOKED?

That was the main reason why we released SMOKED 2.0 was to get completely rid of the "spice" that the original SMOKED gave people!

The new formula is completely updated, stronger, and taste so much better!

Ideally, you would not want to run pre-workout supplements longer than 6-8 weeks without taking a month or so off!

All jokes aside, the new SMOKED 2.0 taste unbelievable!

Here is how the the flavors breakdown:

I am use to high-stimulant pre-workout supplements, is this strong?

Great question, SMOKED 2.0 is extremely strong and we would recommend only starting with half (1/2) of a scoop when first trying this pre-workout.