When we developed STIM & SLIM: We made sure to only use strongest and most scientifically proven ingredients that aid in weight loss ✔

If you start breaking down the ingredients of STIM & SLIM, one thing becomes extremely clear:

We stopped at nothing to create the strongest thermogenic formula possible, sparing no expense to formulate a Thermogenic/Weight Loss supplement developed around clinically-proven and science-backed ingredients😱

Unlike many companies out there, we do not formulate our supplements around Profit Margins or Half Truths.

We formulated STIM & SLIM with proven ingredients to help move the needle in the right direction for your weight loss goals & help you experience better:

Now, don't get us wrong: Nothing will ever supersede proper nutrition and exercise.

However, our focus with STIM & SLIM is to help validate its weight loss potential by helping you hit your goals faster by hitting the 4 most important factors in weight loss. ✔ 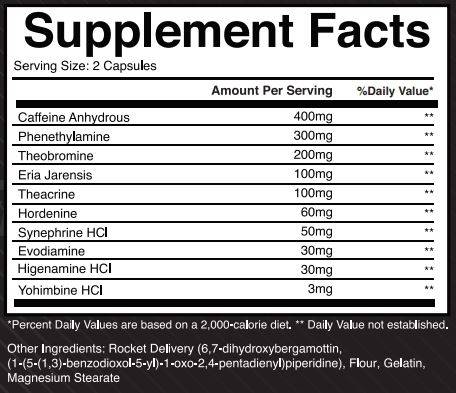 Caffeine Anhydrous: More than a simple cup of joe, experts in sports-medicine acknowledge that caffeine can help you exercise at a consistent level of intensity for longer periods of time while reducing overall fatigue. Current suggested use is between 2-6mg per kilogram of body weight, 15-60 minutes before working out. STIM & SLIM contains 400mg per serving.*

Eria Jarensis: A plant in the orchid family, Eria jarensis is relatively new to the supplement industry, but is quickly gaining steam as a powerful stimulant, focus aid, and mood enhancer. Structured similarly to other PEAs, Eria jarensis provides a significant, longer-lasting stimulant effect on your central nervous system due to its ability to inhibit monoamine oxidase (MAO).*

Evodiamine: The primary reason you will see Evodiamine used in weight loss supplements is due to its suspected ability to increase core body temperature, helping accelerate metabolic rates. Acting as both a thermogenic and stimulant, Evodiamine has been shown to reduce fat uptake in mice, though its fat-burning effects have yet to be empirically established in humans.*

Higenamine HCl: Higenamine HCl is known to stimulate muscle by activating beta-adrenergic receptors. This is thought to mean that muscles can exert more force. Higenamine functions to other activators, such as ephedrine or caffeine, and is known to reach peak levels in the blood after 10 minutes of being consumed.*

What is the best way to take STIM & SLIM?

As a dietary supplement, always assess tolerance first by starting with one (1) capsule daily. After evaluating tolerance, you make take one serving (two capsules) daily.

Can I take STIM & SLIM on a empty stomach?

Yes, In terms of losing body weight, STIM & SLIM is effective when taken with or without food.

No, the only way you may lose muscle while taking STIM & SLIM is by dropping into serious caloric deficits or engaging in actions that would cause your body to lose muscle, whether you are taking it or not.

With the proper nutrition and training, STIM & SLIM can be a great supplement to help aid in losing weight and keeping muscle.

Are there any side effects?

When taking STIM & SLIM, you shouldn't notice any side effects. Some customers have reported an upset stomach when first starting the STIM & SLIM; however, this is typically resolved within a couple days, or when they start consuming food with their dose. Individuals sensitive to caffeine or other stimulants are advised not to take STIM & SLIM.

Should I take STIM & SLIM everyday to see better results?

Yes, the more consistent you are with taking STIM & SLIM, the more it can help you in your weight loss goals.

What happens if I miss a dose?

Nothing, simply continue on your normal schedule of taking STIM & SLIM the following day.

NEVER take more than one serving (2 capsules) of STIM & SLIM within a 24-hour period to make up for a missed dose.

How long can I take STIM & SLIM?

You can take STIM & SLIM for up to 12 weeks. After the 12 week mark, we suggest coming off for four weeks and resuming with STIM & SLIM after this rest period.

If you are looking for a supplement to jump to during this post-cycle period, a lot of customers take INHIBIT during the four week break from STIM & SLIM.